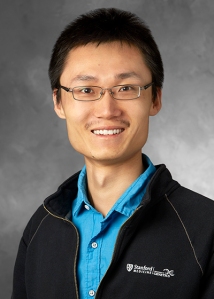 Boxiang Liu is a CEHG graduate fellow supervised by Dr. Stephen Montgomery and Dr. Thomas Quertermous. He graduated from Illinois Wesleyan University in 2013. His primary research objective is to finemap disease-associated causal variants in specialized cell types, with a focus on coronary artery disease.

Can you tell us a bit about yourself, personally and professionally?

My name is Boxiang. I am co-advised by Stephen Montgomery and Thomas Quertermous. My research primarily focuses on explaining molecular mechanisms of genome-wide association risk variants – asking questions like, why do they influence disease risk? What proteins/pathways do they affect? How do they affect such proteins/pathways?

I enjoy collaborating with other scientists, as well as educating non-scientists about what we do in the laboratory.

How did you end up here? How did you first become interested in genetics and science?

I became interested in genetics by accident. I competed in math Olympia in high school and also became a math major during my freshmen year. Later in college, Professor Gabe Spalding and Professor Thushara Perera made me interested in physics. Gabe and I build an optical trap and a custom microscope from scratch; Thushara and I wrote a paper on special relativity. Both of these activities helped me think critically and solve problems creatively.

After coming to Stanford, my initial objective was to extend my undergraduate research and to use optical traps to study protein and RNA folding. After rotating in a few labs, I realized computational genetics piques my interest more than biophysics. As a result, I joined Stephen Montgomery’s lab, in which I learned the tools to analyze sequencing data. At the same time, Thomas and his lab provided me with valuable sequencing data, and taught me quite a bit about molecular genetics.

Can you tell us about your current research and what you hope to achieve with it?

My research primarily focuses on finding molecular mechanisms to explain genetic variants that influence complex traits and diseases. I am going to wear my scientist’s hat and use some jargons to get the points across.

The recent decade saw an explosion of genome-wide association studies (GWAS). The cumulative number of associated risk variants has grown from 2 in 2005 to 41,775 in 2016, averaging a 2-fold increase every year. The majority of these variants (~90%) lie in non-coding regions of the human genome. Although not directly coding for protein sequence and structure, these variants are able to modulate the level of protein expression via regulatory mechanisms, such as interacting with transcription factors and histone binding proteins. Unlike variants in the coding region, we cannot directly infer the target protein of non-coding variants or the direction of regulation from genetic sequences alone. Because of this, the majority of GWAS variants have not been functionally linked to any gene or gene product. Further, the regulatory functions of non-coding variants are largely contextualized on tissue/cell types as well as the extracellular environment. We argue that a portion of the unexplained variants can be linked to their target genes in disease-relevant cell types and treatments. We demonstrate the use of specialized cell types for 1) age-related macular degeneration (AMD), and 2) coronary artery disease (CAD). Using expression quantitative trait loci (eQTL) as a link between genetic variants and gene expression, we identify several novel potential causal genes that can modulate the risk of AMD and CAD.

Were there people (or one person) in particular to whom you would attribute your professional success?

Stephen [Montgomery] and Tom [Quertermous] are great. Stephen is very good at logical thinking. He can pick out the logical inconsistencies from my presentation or manuscript very easily. Tom is very encouraging and kind. He always find a way to make me feel good about myself.

What advice would you offer to other grad students or postdocs who are considering pursuing a similar educational and career path as you?

What are your future plans? Where do you see yourself professionally in the next 5 or 10 years?

I hope to find a faculty position.

Can you speak a bit to the role you see CEHG playing on Stanford campus?

CEHG plays a crucial role in bringing people together from all aspects of genetics. The speaker series and the annual symposium are both examples of that.

What are the differences between the US and your home country (or the country of your previous study)? Have you enjoyed your time at Stanford so far?

The gap between China and the U.S. is closing very quickly. I would say the biggest difference is the amount of attention from advisors. In China, students generally receive more attention and are expected to produce papers from early on. Here, advisors are generally more relaxed and let students explore on their own.

Stanford is a fantastic place. I enjoy doing research here very much.

Tell us what you do when you aren’t working on research and why. Do you have hobbies? Special talents? Other passions besides science?

I play badminton and basketball. I currently train/play 3-4 times every week on badminton. I read books. I try to read one book per week.